You knew it was going to happen; it was just a matter of time. You can’t take any idea, person, song, or fad, shove it down everybody’s throats, and not expect someone to choke on it. In this day of commercialism at any cost and the super saturation of multi-media, we never get a chance to actually enjoy anything. We are spoon-fed as much as we can take by those who make the most money from the meal, until we’ve had enough and can’t possibly swallow another morsel, regardless of how tasty it was – or still may be.

And so it is that Duck Dynasty patriarch Phil Robertson, has become the stick in the spokes of A&E’s biggest money wagon. 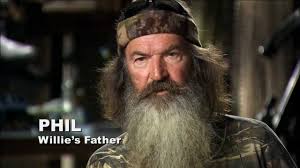 The quiet weekly foray in the hilarious and refreshingly family-oriented antics of the Robertson clan, founders of Duck Commander, creators of the world’s most perfect duck call, soon morphed into the media and retail circus we know today. These changes happen exponentially. We usually get a year or two before the new idea goes mainstream. And another year or two before it spirals out of control into controversy and miserable, humiliating decay. We love this. We cause this. We can’t get enough of a good thing, and so we greedily demand more and more. The powers that be see the financial projections, and recklessly throw away a solid winner for the sake of a quick buck.

Now, we’ve seen increasing interviews with various Robertson family members over the past few months – they were one/some of Barbara Walters’ Most Fascinating People of 2013. We love these guys!! They are a huge, close-knit family, with many of the same issues and conflicts in their homes as we have in ours. Yet, for all their good fortune, they have remained grounded in family and faith, teaching their kids by example, hard work, and high expectations. They are respectful of their elders, loving of each other, and share a mutual respect that can withstand some of the funniest barbs ever shared on television.

But somebody let Phil do a solo interview. If you’ve watched DD at all, you know he’s an outspoken man of faith and conviction. He comes from poor beginnings, and now heads an empire estimated to be worth close to a $100M. Yet, if the show is based on reality, still lives in the same house he shared with his wife and four young sons decades before their success. He still prefers to hunt for his supper, fix his own plumbing, and make love to his wife. Did anyone expect him to be tolerant of any part of a homosexual existence?

Phil tells GQ that homosexuality is a sin, akin to beastiality and promiscuity, and every other one of the big seven.

Ouch! Yeah, well. There you have it.

Never mind the whole right to free speech take, and the current LGBT movement toward global acceptance, and the Christian civil war on the issue, for the moment. Let’s consider Phil.

The fact is, he is a man on the other side of a generation gap that spans farther than any other in the history of mankind. (Sorry, the ‘human race.’ – note, I am of the middle generation…)

While our seniors, the grandparents of today, are desperately trying to get our kids to put down their cell phones, pull up their pants, and wait until marriage, our kids are pushing for a world that is inclusive, compassionate, and fair. Their new world includes food, medicine, and education for everyone on the planet, freedom and safety for all, acceptance of everyone with love and tolerance, even understanding. And it is growing at a pace that no one over the age of fifty can keep up with.

I see Phil, and his entire generation – my own mom included – clutching to a set of values and standards that are now outdated and, well, wrong. They constantly spew comments that make our younger heads spin. I actually heard my mom refer to my kids as ‘coloured’ once. (I won’t begin to embarrass her by listing the litany of offensive drivel she’s surprised us with over the years.) Now, I know she loves them. And I know that my sense of global acceptance was learned from her. But she can drop the odd opinion that can silence an entire room. We’re trying to teach her, to catch her up. But the going is slow and tedious; we’re trying to unteach a lifetime of behaviour.

Like Phil, she has her opinions. She’s trying to keep up, but failing miserably. She sees our younger generation as doomed, by her standards, and she is afraid for them. She doesn’t understand or foresee the changes that technology promises our kids as they become more and more connected, not less so as she perceives it. She sees everything that she, her peers, and her ancestors worked so hard to create for us and our children, falling into chaos. And it’s all slipping away like water through her fingers.

Knowing this, I would never let her do a solo interview with a major magazine.

No matter how kind-hearted, good-natured, and well-meaning my mom is, much like Phil Robertson, she has a tough time fitting in with the new rules of social acceptability. And I certainly would not put her in a position to be publicly misunderstood and attacked.

Phil Robertson is a good man. He has good morals and the right priorities. He has his own opinions, and interprets his faith to the best of his ability. But to expect him, a man so set in his convictions, to be able to keep up with this turbo-charged world, is unrealistic and unfair. Our focus should be on his children, and his grandchildren, all of whom carry both the righteous faith and sense of responsibility instilled in them by their grandparents, as well as the open-minded acceptance and awareness of the world they’re growing into. They all have the privilege of inheriting their family legacy of love, family, and conscience, which they all value more than the money in the bank. Our world needs leaders who can marry the best of the past with the prospects of the future. Kids like the Robertsons. Families who watch and learn from families like the Robertsons.

Phil’s comments are a teaching moment. For all of us: parents, children, media, politicians, leaders. His heart is in the right place. Even if his method of communication needs a whole lot of work.

Alex Meryn is a Canadian writer who suffers from a grandiose sense of the obvious. The old adage, "One who does not suffer fools lightly," applies perfectly to this master of common sense and wit.

Until the human genome takes control and puts her in her place. With a healthy sense of humour, flavoured with a good dose of sarcasm, she shares her thoughts with the world.

Whether the world is listening or not.

You can keep in touch with Alex Meryn by:
~ commenting beside a blog post,
~ subscribing to her blog, and/or
~ e-mail, at, alexmeryn (at) gmail (dot) com